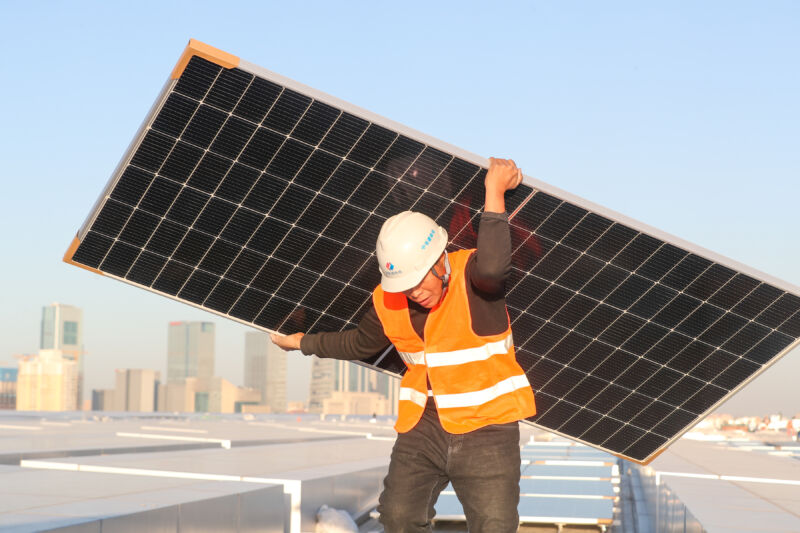 Enlarge / Workers install photovoltaic panels on the roof at the reconstruction project of Fengtai Railway Station on November 12, 2021, in Beijing, China.

Around the world, countries installed renewable power at a record pace in 2021, according to a new report from the International Energy Agency. The trend is likely to continue for the next five years, with 95 percent of all new electrical generating capacity being renewable.

“This is equivalent to the current global power capacity of fossil fuels and nuclear combined,” the IEA said in the report.

Yet even then, the world will need to double the rate at which it adds renewable power in the next five years to remain on track to reach net zero in 2050. To keep pace with variable wind and solar power, energy storage will have to nearly double as well. The world can’t just add more renewable power—it has to replace existing fossil fuel plants as well.

Though that may seem like a long shot, consider that the IEA issued this new report because last year’s was quickly outdated by new commitments made at COP26, the international summit where the world’s nations hash out a plan to tackle climate change.

“We have revised up our forecast from a year earlier,” the IEA said, “as stronger policy support and ambitious climate targets announced for COP26 outweigh the current record commodity prices that have increased the costs of building new wind and solar [photovoltaic] installations.”

Rising commodity prices bring fresh uncertainty to the mix, with steel, copper, and aluminum all up 50 percent or more since the start of 2020. Photovoltaic-grade polysilicon has quadrupled, and shipping fees are up six-fold. That risks delaying 100 GW of renewable power, the agency said.

But renewables aren’t the only part of the energy industry being hit by inflation. Both natural gas and coal prices have shot up, the report notes. Since a significant portion of a wind or solar farm’s costs are incurred during the construction phase, renewable energy is often available under fixed-price contracts. For companies and homeowners, that offers an appealing hedge against inflation.

Despite the added costs, much of the world’s new renewable power will come from photovoltaic solar. Governments continue to encourage homeowners to install solar panels, and utility-scale solar farms are spreading around the world. Wind, both onshore and off, will continue to grow, too, though at about half the rate of solar.

Wind and solar’s weakness, of course, is that the Sun sets and the wind doesn’t always blow. They are what the energy industry calls non-dispatchable power sources. That’s why solar and wind developers are increasingly building energy storage capacity alongside their projects.

In the next five years, the IEA expects that the construction of new energy storage capacity will double. By 2026, the world will be able to store 12 TWh of electricity, enough to power New Zealand for about four months.

Most of the new storage will come in the form of grid-scale batteries, about 50 GW worth of capacity, which is six-times today’s growth. Batteries have the advantage of being able to respond to demand almost instantaneously, and putting more on the grid will likely enhance its stability. But today’s grid-scale batteries, which are usually lithium-ion, run out of juice after about four hours. Other types, like flow batteries, can run for longer, but they’re still relatively rare by comparison.

The other main source of storage will be pumped storage hydroelectricity, also known as pumped hydro, where water is pumped to a higher elevation when electricity is plentiful and cheap—like on sunny, windy days—and released when supply dips or demand spikes. It’s an old technology that’s widely used around the world, and it’s finding new relevance as the world adds more variable renewable power.

Pumped hydro plants may not be able to react as quickly as lithium-ion batteries—they take about a minute or more to start generating—but they make up for it with longevity. Some plants, the IEA notes, can produce power for a week before needing to be recharged.

Today, pumped hydro is the largest form of energy storage, and the IEA believes it will remain so in five years, with 40 GW of additions expected. India will be adding the most in that time, mostly by retrofitting existing reservoirs. Typically, a retrofit involves building a new, often smaller reservoir above an existing one and connecting the two with tunnels known as penstocks.

Because pumped hydro is heavily dependent on topography, there are limits to how much of it can be developed. That has pushed some engineers to devise creative alternatives, including retrofitting retired coal mines to serve as underground reservoirs.

The IEA expects pumped hydro to continue to grow, providing 9 TWh of storage by 2030 compared with 3.8 TWh from batteries.

“Renewables are the backbone of any energy transition to achieve net zero,” the IEA said in its report. Yet despite the newly ambitious targets that countries have set, the agency points out that they still fall short of what’s needed to reach net zero in three decades.

To deploy even more renewable power, the agency suggests that governments speed the permitting process and make it easier for solar projects to hook up to the grid. If the right policies are put in place in the next year or two, the IEA thinks the world can add an additional 25 percent more renewable power. That’s short of the doubling it recommends for a net-zero scenario.