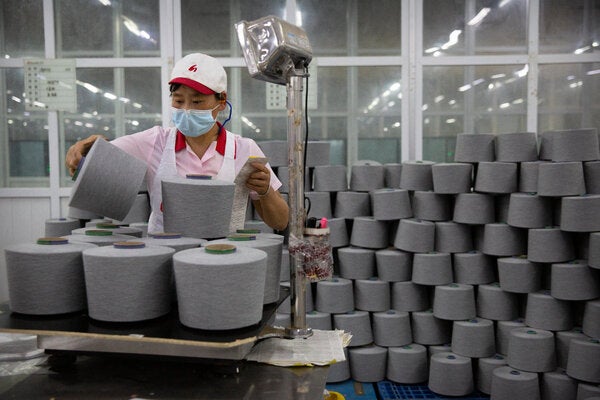 WASHINGTON — The House on Wednesday overwhelmingly passed a bill that would ban a wide array of imported products made in China’s Xinjiang region, moving over the strong objections of large corporations to crack down on companies sourcing goods produced through forced labor by persecuted Muslim minorities.

The lopsided 428-to-1 vote reflected increasing bipartisan ire at China’s human rights abuses in Xinjiang, where officials have waged a campaign of repression against Uyghurs, the Muslim ethnic minority group, detaining as many as one million in internment camps and prisons. But the legislation’s fate is uncertain in the Senate, where similar efforts have stalled amid a fierce lobbying effort by businesses that have argued that the bill’s requirements are too onerous and would disrupt global supply chains.

The measure would impose high standards for companies seeking to import products from the region, barring imports of goods made “in whole or in part” in Xinjiang unless companies could proactively prove to customs officials that the products were not made with forced labor.

The Biden administration, like the Trump administration before it, has declared that it considers China’s wide-scale repression of Uyghurs in its northwestern Xinjiang region a genocide, and accused the Chinese government of committing crimes against humanity.

Those offenses have included placing Uyghurs and other ethnic minorities in concentration camps, forced sterilizations and abortions, and torture and sexual abuse. Lawmakers have been particularly aggressive in trying to compel companies to cut ties with suppliers implicated in Uyghur forced labor.

“We will never forget our responsibility to act upon the actions that the Chinese government is engaged in,” Speaker Nancy Pelosi, Democrat of California, said on Wednesday. The legislation, she said, “employs America’s great economic might to combat this brutality and hold the perpetrators accountable.”

Representative Thomas Massie, Republican of Kentucky, cast the sole “no” vote. He has said he opposes the bill because he believes the United States should not interfere in the internal affairs of foreign countries.

The resounding approval capped months of simmering tensions among lawmakers, Biden administration officials and corporate lobbyists, who sometimes found themselves at odds over exactly how far the legislation should go.

A number of prominent business groups and companies had bristled at the standard at the heart of the bill, which presumes that all goods produced in the region are made with forced labor unless companies can prove otherwise. They have argued that it would be overly arduous given the opacity of Chinese supply chains and the difficulty in auditing them.

Companies including Nike, Coca-Cola and Apple lobbied Congress in an attempt to weaken that provision, claiming that the passage of the bill could wreak havoc on already crippled supply chains. Roughly one in five cotton garments sold globally contains cotton or yarn from Xinjiang, and the region produces a significant portion of the world’s polysilicon, which is used to make solar panels and smartphones.

“It is a piece of legislation that will impose substantial constraints and costs on corporations that have been operating their supply chains in ways that ignore labor rights with impunity,” said Scott Nova, the executive director of the Worker Rights Consortium, an independent labor rights organization. “And it is vehemently opposed by powerful corporations across industrial sectors.”

Sign Up for On Politics   A guide to the political news cycle, cutting through the spin and delivering clarity from the chaos.

Representative Thomas Suozzi, Democrat of New York and the chairman of the Uyghur Caucus, acknowledged in an interview that a number of counterarguments had quietly loomed over the bill, from corporate lobbyists nervous about profits and supply chains to climate hawks worried about endangering the nation’s access to solar panels.

“To all those things, I say, ‘That’s too damn bad,’” Mr. Suozzi said. “We have to do this. This is so egregious that we’ll have to just figure out another solution. We’re just going to have to innovate our way around it. We can’t allow this to continue.”

The legislation passed the House in September 2020 by a 406-to-3 vote. At that time, it faced headwinds in the Senate, especially on the Banking Committee, where some lawmakers were sensitive to corporate concerns about a stringent reporting requirement embedded in the text.

That provision, which would require companies to disclose the extent of a wide range of activities conducted in the Xinjiang region, was ultimately stripped out of the Senate bill, which passed unanimously in July.

Understand the Disappearance of Peng Shuai

Where is Peng Shuai? The Chinese tennis star disappeared from public view for weeks after she accused a top Chinese leader of sexual assault. Recent videos that appear to show Ms. Peng have done little to resolve concerns for her safety.

Who is Peng Shuai? Ms. Peng, 35, is a three-time Olympian whose career began more than two decades ago. In 2014, she rose to become ranked No. 1 in doubles in the world, the first Chinese player, male or female, to attain the top rank in either singles or doubles tennis.

Why did she disappear? On Nov. 2, Ms. Peng posted a long note on the Chinese social platform Weibo that accused Zhang Gaoli, 75, a former vice premier, of sexual assault. Within minutes, censors scrubbed her account and a digital blackout on her accusations has been in place ever since.

How has the world responded? The censors might have succeeded had Steve Simon, the head of the Women’s Tennis Association, not spoken out on Nov. 14. Ms. Peng’s accusations have drawn the attention of fellow athletes, the White House and the United Nations.

But the measure languished, with neither the House nor the Senate interested in taking up the other’s bill. The House advanced a larger China-focused measure that included a version of the Uyghur legislation with the reporting mandate intact, but the Senate declined to take it up.

Those issues are likely to crop up again as the bill passed by the House on Wednesday makes its way to the Senate.

The fresh burst of momentum behind the proposal came after Senator Marco Rubio, Republican of Florida, held up the annual defense bill, demanding that his version of the forced labor legislation get a vote. Mr. Rubio accused Democrats of bowing to pressure from corporations and the Biden administration in slowing consideration of the legislation, a charge they hotly contested.

Mr. Rubio said in a brief interview that while he was heartened to see the House pass its legislation, he was worried that reconciling the two versions of the bill would prove cumbersome.

“The problem for me is not the content, it’s the fact that it touches on some issues” that cross several committees’ jurisdictions, he said.

The House on Wednesday also approved legislation admonishing the International Olympic Committee for “failing to adhere to its own human rights commitments” in the case of Peng Shuai, the Chinese tennis star who disappeared shortly after accusing a former top government official of sexual assault.

In statements addressing the situation, the I.O.C. has refused to mention her assault claims and accepted Chinese government officials’ assurances that Ms. Peng is safe. The committee has argued that its nonconfrontational approach has been in the interest of helping Ms. Shuai through “quiet diplomacy.”

“The I.O.C. has once again failed to protect athletes from sexual abuse and harassment, and should publicly commit to hold sexual violence abusers accountable,” said the legislation, led by Representative Jennifer Wexton, Democrat of Virginia. “The I.O.C.’s conduct undermines the efforts by the United States government, human rights organizations, the Women’s Tennis Association, and other international bodies and individuals to secure Peng Shuai’s safety.”

Solar Energy We thank our sponsor for maki...

Get 15% off on solar panels, generators, and more with this early Black Friday sale

Oil Prices Crash As Covid Does What Biden Couldn’t